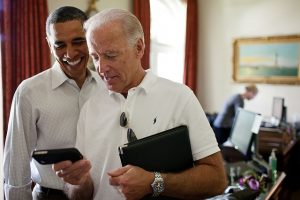 We love you Joe Biden but you are not a president

In total, there have been 48 men have served as the Vice President of the United States. And fourteen of those men went on to become president. But there are five Vice Presidents turn Presidents that are a notch above the others.

Roosevelt initially served as the Assistant Secretary of the Navy for President William McKinley. He later left that post and served as the Governor of New York. After Vice President Garret Hobart passed away in 1899, McKinley asked Roosevelt to be his running mate in the 1900 election. The pair won in a landslide.

When McKinley was assassinated in 1901, Roosevelt became president. Roosevelt ran for re-election in 1904 and won. After serving a full term, Roosevelt was succeeded by his close friend William Howard Taft. Teddy was a great president but not nearly on the same level as his fifth cousin Franklin D. Roosevelt who established social security.

Coolidge served as vice president under Warren G. Harding. Surprisingly, Coolidge was not Harding’s first choice for a running mate. Irvine Lenroot, a senator from Wisconsin, was initially selected. After Lenroot vacated the position, Coolidge was chosen for the position.

President Harding died suddenly in 1923. Coolidge was sworn into office the day after his death. In 1924, Coolidge ran for re-election and was elected to a full-term. While Coolidge was president, the United States saw significant economic growth.

Curiously, Johnson is one of just four people to have served as a senator, a congressman, the vice president, and the president. Before his election to the House of Representatives, Johnson worked as a congressional aide.

Harry S. Truman was the vice president of Franklin D. Roosevelt. When Roosevelt passed away near the end of World War II, Truman took over his office. At the time, Truman had been vice president for just 82 days.

Truman ran for re-election in 1948. While Truman was initially expected to lose, he wound up defeating his opponents and winning a second-term.

Gerald Rudolph Ford, Jr. became president after Richard Nixon resigned from the office. He is the only person to have become president without being voted into the office of president or vice president. He ran for re-election in 1976 but lost to Jimmy Carter.