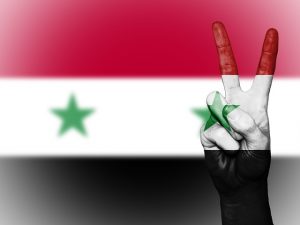 The political climate in the United States is horrendous right now. President Trump is doing everything he said he would do during his campaign. Unfortunately, most of what he promised to do are actions that alienate and enrage many of his followers as well as his opponents.

One such area is the question of Syrian refugees. The situation in Syria has been delicate for years, causing hardship for President Obama during his last term. President Trump, who was voted into office on a platform of not knowing anything about politics, has been unable to decide how to approach this delicate situation.

Why Should We Refuse Syrian Refugees?

There are several reasons people want to refuse refuge to people from a war-torn country. These reasons are espoused largely by the Republican party, though the logic is enticing to some on the left, as well.

Rep. Mo Brooks (R-AL), as one example, claimed that the United States is “paying [the Syrian refugees] to be here” during an interview on the Dale Jackson Show. He went on to state that the refugees get free health care and other social benefits, paid for by U.S. tax dollars. As a final point he stated that Islam is a fundamentally violent religion, stating he felt that “…terrorists are doing exactly what the Koran tells them to do”.

Of course, a less extreme reasoning suggests we have needs in our own country that must be addressed. They point to the estimated (as of 2013) 2.5 million homeless children or 58K homeless veterans from motorcycle accidents and state that the nation’s time, money, and resources should go to helping its own citizens first.

Why Should We Allow Refugees?

The major argument on the left is a moral one rather than one based on specific needs. That is, the Democrats argue that Syria is fleeing a civil war, their lives are being torn apart by the same terrorists the U.S. is trying to stop, and so we have a moral obligation to offer those people protection.

Even if the United States was not in direct conflict with those forces, the alternative for many refugees would be one of several refugee camps. Lastly, they show one of the multiple pictures of injured refugees, terrified for their lives and the lives of their children. For many, this is a powerful image.

Indeed, the arguments of the Republicans and the right make it difficult for the left to find numbers. It’s impossible to prove mathematically how many people aren’t terrorists, since that requires knowledge that’s impossible to find until they commit an act of terrorism.

What is possible is to point out that the United States spends $601B every year on military spending. Much of this money goes to the research and development of new equipment, but that equipment is of questionable use. The F-35, as just one example, went $165B over its budget and took an additional 7 years from it’s estimated time to completion and yet is not as functional as the F-16, which it was designed to replace.

If that money had been spent on helping our own citizens, the Democrats argue, we wouldn’t need to worry about the additional cost of refugees.

If one piece of candy in a bowl of candy is poison, would you eat the candy? The Republicans argue no, that would be dangerous. The Democrats don’t argue about eating candy, but rather point out (100% correctly) that the same argument was part of 1938 Nazi anti-jewish propaganda.

This is the major political ramifications of the Syrian refugee issue. With neither side capable of deciding if we must make a moral judgement or an economic one, it’s difficult to find common ground. And with the moral argument being incredibly strong, it’s easy for those who think the economic viewpoint is more important to become defensive.

The end result is a major division in the U.S. political environment at a time when we most need unity.