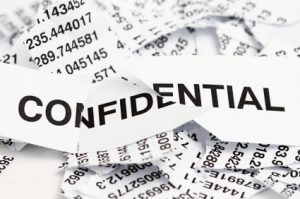 Recently, a government commission determined that extended use of private and confidential information could increase the ability for the government to determine efficacy of government-based programs. The question at that point then becomes what is the government’s new meaning of confidentiality?

Like many other citizens in this country, there are things about myself that I simply do not wish to disclose into the public eye: the more obvious ones include the likes of identity information, medical records and financial information. These are what people consider private or confidential information – because they wish to keep it that way. Generally, this information is privy only to those to whom it directly applies. Medical personnel – and only certain medical personnel – are cleared to check my medical records; the same applies to financial consultants, bankers, and accounts in regard to financial records. The part that becomes most disturbing in that line of thought is the ironic anonymity of who suddenly has the ability to go over my records – whether I like it or not – because the government reforms policy so as to impact program efficiency.

One of the greater detriments to this seems to be the potential for the one-sided operation of the situation. Even if this were to operate on a level similar to the Internet privacy regulations that were repealed earlier in the year, according to Alina Selyukh, the wide demographics that would potentially be covered as a result leave room for much speculation. Would government agencies offer options to “opt-in” or “opt-out” as Internet service providers allegedly do if someone does not wish to disclose confidential information? Could the individual citizen even count on the government to consider the possibility of addressing the options on an individually-based level?

The Commission on Evidence-Based Policymaking that proposed the possibility of modifying laws to expand the Federal government’s ability to collect and utilize data – a commission that was initiated last year under the Obama administration with the cooperative efforts of current House Speaker Paul Ryan and Senator Patty Murray – addressed the necessity of utilizing modern privacy-protecting technologies in the event that such policies happen to be approved while reinforcing the need for more data to be collected to make informed decisions.

“Policymakers must have good information on which to base their decisions about improving the viability and effectiveness of government programs and policies…Today, too little evidence is being produced to meet this need,” determines the commission’s report as of early September.

So, let me get this right. The Commission does not believe that furthering access to an individual citizen’s confidential data will increase its risk for unnecessary exposure? Implementing strict controls on how the information changes hands might be one thing as well as utilizing privacy-protecting technologies (whatever that might entail), but the average American citizen is less able to hold anyone, let alone the Federal government, accountable in such cases where private information falls into the wrong hands.