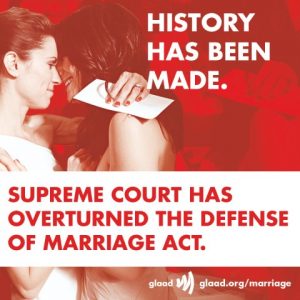 Byname of U.S. Public Law 104-199., the DOMA (Defense of Marriage Act) law in force from 1996 up to 2013 which specifically denied all same-sex couples all federal recognition and benefits bestowed upon opposite-sex couples. What those benefits included owe over 1,000 federal privileges and protections, for example access to employment benefits of a partner, recognition of relationship, joint tax returns, tax exemptions, residency or immigration or partners which were not citizens, rights of inheritance, protection from domestic violence, next-of-kin status. As well as the right to live together in college or military housing.

The way that DOMA advocates viewed opposite-sex marriage was as being the only appropriate context for procreation and for forming a family According to supporters of DOMA, alternative family formations was validated by same-sex marriage, it undermined monogamy and opposite-sex marriage, it encouraged relationships that were incestuous as well as polygamous marriage. Opponents argued that definition of marriage and family that were narrow like this devalued every other kind of relationship and family, discriminated based off of sex, and related homosexuality with polygamy and incest.

The U.S. Supreme Court struck down the definition the DOMA placed on marriage as a legal union between one man and one woman in 2013 (United States v. Windsor). The provision of law which had allowed these states to refuse to recognize same-sex marriages that had taken place in another jurisdiction was in 2015 invalidated by the court (Obergefell v. Hodges), which granted same-sex couples the constitutional right to marry.