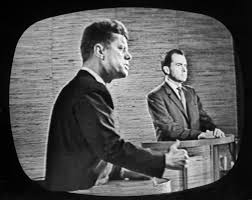 When you hear the word “election,” one of the first things that probably pops into your mind is the very public debate system that is now used for every seat from President to the city council. However, you might not know much about the history of political debates and how they became an important part of the election process.

For much of the history of the country, debates were a non-issue. The first actual debate involved Abraham Lincoln before he became president of the country. He had followed a competitor and questioned him from the audience. At one particular venue on the journey, both men took the stage and debated for more than three hours about the issues of the day.

However, the trend did not catch on at that point in time. Many years later, the radio helped a bit with attention to Thomas Dewey and fellow presidential contender Harold Stassen taking to the airwaves to debate their differences on communism and whether it should be outlawed in the country. A few more debates even took place on television with little fanfare.

That all changed when future presidents Richard Nixon and John F. Kennedy engaged in a televised debate during late September 1960. Nixon was not feeling well and had been hospitalized recently. His color was poor and he had dropped some weight while ill, making him look even more gaunt.

On the other side of the stage sat JFK, just back from California and showing off the casually handsome tan and winning smile the young man became known for. While those who listened on the radio found Nixon held himself well during the debate, those who were watching future-President Kennedy were mesmerized, at least somewhat, by the healthy and energetic young candidate. It’s sad what happened to him in Texas.

It became clear that debates were a huge deal in election outcomes and that appearances played a big role, possibly even more than where candidates stood on issues. It has been more than 50 years since then, and debates take place at every level of the political field today.

While it seems earlier citizens had little interest in debates, the addition of television access to the political process seems to have changed all of that. Though few candidates resemble JFK, they have learned the lessons of charm and ease when speaking to the public. Every debate these days has something interesting to unveil!