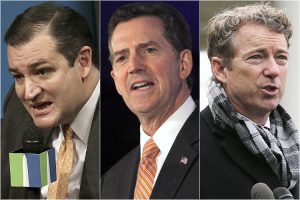 If there is any particular way that we get divided in America, it’s not by race or color or gender or sexual identity. Those are forced or encouraged by politicians.

How we are most generally divided is by our political ideologies. In America, we are all on a spectrum of ideology, going from left to right – progressive to conservative. Political parties are created to cater to a certain group on that spectrum, and people who join those parties join because those parties most often share their values and priorities.

Political parties often get members who compromise some of their beliefs, instead wanting to belong to a group, and that may mean prioritizing their stances on various issues and then joining the party that fits those higher-value, high-priority stances. If America had a political party for every ideology, there would not be just two major parties – there may likely be six or seven coalition parties that share power, because people inherently don’t want to compromise their beliefs, but they will if it means belonging to a group.

Ideologies vary across the spectrum and they all seem to have different names – far-left, progressive, liberal, moderate, centrist, conservative, libertarian, leftist, socialist, fascist, ar-right, alt-right and so on. Each has its general place on the spectrum, and even those who are “apolitical” have stances on some issues and just don’t want to discuss because it’s impolite at dinner parties and family reunions.

What you hear a lot these days are terms like the “far right.” Do we really know what that means?

On the broad American political spectrum, it means the farthest right or conservative side of the spectrum. But it can also apply to individual political parties, and the far-right or most conservative flank of a political party – even if that paty hs progressive ideas and values.

The best definition of “far right” in politics is that a person who is on the “far right” is someone who is the conservative or traditional within a political ideology, or on the entire political spectrum.

In some ways, there is no “far right” in the Democratic Party anymore, but these types of people would be these so-called “Blue Dog”Democrats – those who have more traditional (or conservative) stances on some issues – maybe they support abortion, but not beyond the first trimester for example. Someone on the “far right” of the Democrats might be a “pragmatist” like a Sen. Joe Manchin of West Virginia, who absolutely supports the coal industry an think it’s wrong to shut it down, while the Democrat platform is in support of regulations and laws that make coal mining go extinct due to climate change.

Along the full ideological spectrum, the “far right” in America tends to be very free-market oriented, withminimal government interference except in matters of protecting people, rights and property. (No, “far right” is not the same as “alt-right.”) America had a free market for most of the first 150 years of existence, and those who wish to maintain those traditional roles and function of government are the “far right,” or some may call them “constitutionalists” or “objectivists,” in a reference to Ayn Rand and her philosophy of Objectivism.

“Far right” has been noted in some references as authoritarian or nationalist, but that is misleading. Those on the far-right are not the alt-right, which is nationalist and fascist/authoritarian in nature. The far right instead is more like pure libertarianism, where the government’s only job is to protect indivdual rights, liberties, and property and about everyone having equal opportunity with no government dictating winners or losers. Anything else placed upon the “far right” is ideological labeling from someone to the left on the ideological spectrum.