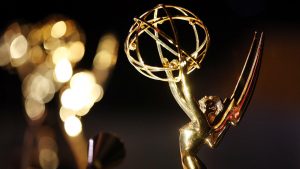 The Emmys are a well-recognized and appreciated awards show to celebrate prime time television.

It brings together some of the most prominent personalities and talents from around the nation. However, this doesn’t mean the Emmys are devoid of controversy, and everything is as merry as it appears on stage.

The politicization of the Emmys has long been mentioned as a point of concern.

The awards were going to shows that had a political twist to their content. This theme started to become apparent as the likes of Saturday Night LIve (Donald Trump skits), The Handmaid’s Tale, and others began to sweep away every category.

Not only were the awards left-leaning in how they were presented but the general sentiment remained as such from start to finish. This was mentioned by White House Advisor Kellyanne Conway in her brief comments about the Emmys.

However, it was apparent a lot of the anti-Trump posturing had to do with the ongoing events.

According to those in the audience, it was normal and nothing out of the ordinary. Viewers were left with content that was one-sided and only looking to work along the lines of this anti-Trump rhetoric.

While the importance given to politics was intriguing and might have been noteworthy, it started to get in the way of the awards. Other deserving shows were pushed to the side because they didn’t fit this political theme that was ongoing, according to an estate lawyers.

Winner after winner had some attachment to the political undertones that spread across the awards show.

This meant shows that might have won in any other setting were left to rot away such as The Stranger Things. It was all about focusing on TV shows that maintained that political connection and continued to make a point about the ongoing politics in America.

Yes, Hulu was able to overcome all of the large budgets around it due to this reason.

It was able to make the most of its politicized content and push it to the top while others were left with nothing. While this is an exciting time for the company, it might have more to say about how the Emmys were hosted.

However, the writer of Handmaid’s Tale said this was the beginning of something special, and it was normal for people to talk out about her content. She said it was the same when she first released her book.