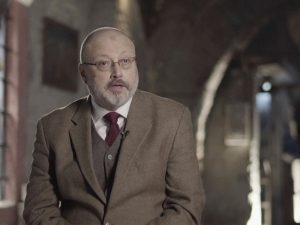 Earlier this month a Saudi journalist by the name of Jamal Khashoggi disappeared. His abduction, torture, murder and dismemberment have all been alluded too but not been confirmed, but President Trump doesn’t seem to think the situation takes any precedence–especially when he has an important arms deal hanging in the balance. Any unfortunate spike in the political volatility in Saudi Arabia comes at an inopportune time.

Jamal Khashoggi is a U.S. resident, and his brutal murder has created an uproar and a call for retaliation. Khashoggi disappeared while on a visit to the Saudi consulate. Many have noted that he often protested Mohammed bin Salman, the Saudi crown prince. Was Khashoggi the victim of a hit squad?

Turkey is currently investigating the crime. According to officials working on the case, Khashoggi was likely murdered in the consulate. After, his body was dismembered and transported elsewhere. The Turks currently hold a smoking-gun audio file which proves that Khashoggi was killed on-site. Alongside Saudi investigators, they searched the consulate in the hopes of discovering additional evidence.

Saudi Arabia is reportedly ready to acknowledge the death of Khashoggi as a result of a botched interrogation, although other sources say that there was never any interrogation at all, and that Khashoggi was specifically targeted by a hit squad. Mr. Trump has theories of his own, including that Khashoggi may have been the victim of a merry band of rogue killers and not the crown prince, suggesting that King Salman denied knowing anything about the attack.

Still, Trump also said that Saudi Arabia would be punished if the allegations are proved. He also made a comment about how tired he is of the “guilty until proven innocent” rhetoric. He sent the Secretary of State to meet with King Salman, while the king sent a public prosecutor in Saudi Arabia for internal investigation.

Angry democrats believe that it’s time disrupt relations with the kingdom, but Trump isn’t having it. The arms deal is worth about $110 billion, and he doesn’t want to risk something of that magnitude without all the facts.

It seems there will be a battle in Congress over whether or not to dismantle the deal, and it will be some time before we know which side wins.