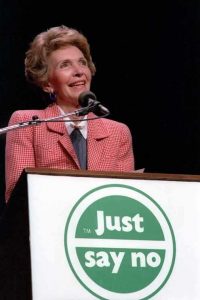 The War On Drugs is primarily associated with the United States desire to end the illegal drug trade and influx of drugs into the nation. The initiative was begun under the presidency of Richard Nixon and set forth a number of policies that were designed to end the production, consumption, and distribution of illegal psychoactive drugs. It was at this time in 1971 that President Nixon announced that drug abuse was considered “public enemy number one”. This war that began over 45 years ago costs American taxpayers over 51 billion dollars a year.

The war on drugs would pick up considerable steam under the Reagan administration. In fact, it was Nancy Reagan who would create the Just Say No campaign to introduce this war to children across the world. The campaign would use cartoon and sitcom stars to showcase this new aspect of the war. While it was a highly successful campaign and got children talking about drugs in the open, it did very little to slow down drug use in the nation (especially in Missouri) or world.

The war on drugs would continue through the next several presidential administrations with very little change. It would not be until President Obama took office that the war would take on a new course. While the war would continue, the administration decided it would no longer be known as a war on drugs. It was decided that the term was counter-productive and that drugs needed to be treated as a disease and not the enemy. In fact, it was the drug policy of Sweden that changed the policy of the United States. Within Sweden, there has been great care to provide health care for drug addiction as well as drug legalization. It has been shown to work as the Swedens use of cocaine is barely one-fifth of what Spain uses. It is assumed if we follow a similar policy the drug rate will lower. Which is one of the reasons there has been a considerable turn on the legalization of marijuana in this country?

However, with all of the policies and money that has been spent the war on drugs was declared a failure in 2011. In addition, it was stated that the world is a worse position due to the war on drugs. It is now known that new initiatives need to be put in place and the world needs to rethink drug policies.