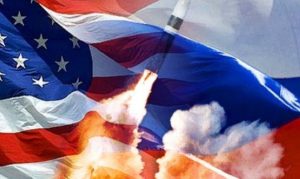 During the late 1980’s, a great change was taking place within the borders of the USSR. Under Mikhail Gorbachev, the power of communist rule seemed to relax, and several nations once under its rule found themselves pulling away and becoming their own sovereign nations. It was during this time period that the long stretch of history between the United States and the Soviet Union also officially came to an end. Under President George H.W. Bush and Gorbachev, the Cold War was declared ended at the Malta Summit in 1989. Just over 2 years later, the entirety of the Soviet Union had dissolved, and the successor state – the Russian Soviet Federative Socialist Republic – came into existence, with Boris Yeltsin as its first President.

As Yeltsin reached out to both Presidents Bush and Clinton during their respective administrations, Russia and the United States initially had amicable relations with each other despite the tenuous history of the Cold War that had existed just a few years past. Several pieces of joint legislation were signed in mutual cooperation; an exchange of intelligence between FBI and KGB files was initiated for the sake of locating POW’s and MIA’s from the Cold War. Under Clinton, the United States had committed several billion dollars to aid Russia in various aspects, including medical and governmental assistance, even providing funds for Russian entrepreneurs. Russian and the United States enter into discussions over mutual nuclear disarmament. The two countries even came to share resources dedicated to energy and space technology development.

Beyond the bilateral partnership that seemed to benefit both countries greatly, the United States and Russia under Clinton and Yeltsin also tended toward offering similar support toward other world events. They both condemned terrorist attacks in Israel that took place in 1996, and they both supported progress toward peaceful resolutions in the Middle East. The two countries attended several summits of varying purpose. To say that the countries had established a rapport with each other might well have been an understatement.

By the time George W. Bush had been inaugurated nearly alongside Vladimir Putin, relations began to deteriorate. While many events took place that showed a mutual way of thinking between the United States and Russia, it should also be noted that Russia became more aggressive in international affairs. After the events of September 11, 2001, the United States and Russia had significant, though not malicious, disagreements about policy. Russia criticized the United States for the war in Iraq that began in 2003. They criticized the United States’ withdrawal from the Anti-Ballistic Missile Treaty in order to establish a defense system. Russia also became more guarded in its sphere of influence, interpreting United States interest in Central Asian resources to be an affront. An increased United States presence in Eastern Europe lasting up through the late 2000’s, particularly with a United States missile defense system installed and staffed in Poland, caused Russia to take further caution when dealing with the United States. It appeared relations had become severely strained between the two nations.

Despite what appeared to be a genuine attempt during the Obama/Medvedev administrations to reestablish relations between the United States and Russia, Putin in the election for his third term in office accused the United States of interfering with the electoral process after Vice President Biden had called for Putin to refrain from running for reelection. Putin began his third term in March 2012, and the United States and Russia, despite criticism of Obama’s performance, worked jointly with each other, although the personal relationship between the two leaders was marked as severely uncomfortable. Relations continued to deteriorate: the Snowden incident, the Ukraine crisis, Russia’s intervention in the Syrian Civil War. Russia also faced criticism by the United State for interfering in the 2016 Presidential election.

During the current Trump administration, relations initially appear to remain strained. Although Presidents Trump and Putin have often appeared to hold a relatively high regard for each other in public, discord among policy still existed. Sanctions were placed on Russian companies discovered to be involved with North Korea, Syria or Iran. Trump called for Russia to cease support of “hostile regimes” and Putin had forced over 750 diplomatic personnel under the United States to leave Russia, supposedly to balance diplomatic representation in both nations.