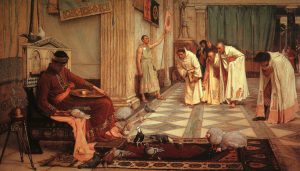 Monarchy, democracy, communism, socialism–you’ve heard of the most popular forms of government, but you certainly don’t know them all. There are a number of kinds of government that are primarily theoretical. Some haven’t happened yet, and perhaps many never will. Some theoretical governments are controlled by those who develop that civilization’s technology. Others are controlled by the scientists and researchers who govern which technology might someday be built. A timocracy is built only by those people who own land and wealth, and those who rule usually do so because of ambition or honor.

This form of government was an idea conceived of by the Athenian ruler Solon in the 6th century BC. He built a timocracy, and allowed rulers into his timocracy according to a hierarchy with four tiers inside of the civilization’s population. If you were a manual laborer, for example, you were considered a member of the “thetes” tier of the timocracy. The thetes were the lowest rung of the ladder, and so they couldn’t get close to elected office. However, being a member of the poorest class had at least one benefit that most Americans would love–the thetes never paid any taxes.

The next tier on the ladder was known as the zeugitae. These were tillers of the land. Their class was defined in a few different ways, all of which were applicable. To be considered a member of this tier, you needed to be the proud owner of at least a pair of pack animals. You needed to produce at least two hundred bushels of produce annually (this was the primary requirement). Although you had to pay taxes, you could expect to hold minor offices that no one on the higher tiers would ever want. You could also afford armor, and so zeugitae could serve in the army as hoplites.

If you produced just a hundred more barrels a year–three hundred, to be exact–you were a member of the knight class, or hippeis. You could afford weapons and armor and cavalry because of the extra money. Members of this tier could expect to command a great deal of respect, and again you could hold offices slightly higher up the ladder.

The highest tier of Solon’s timocracy was–get ready for this–a pentacosiomedimni. Go ahead and try to say that five times fast. Members of the pentacosiomedimni produced five hundred bushels of goods annually are were granted the means to hold the rank of general. Because you reached such a high level of prosperity in ancient Athenian society, you could make an attempt to insert yourself into extremely high positions within the government. They included the ecclesia, the Council of 400, the Council of Areopagus, and nine archons and treasurers.

Even though democracy doesn’t expressly suggest a tier system regarding the amount of property or wealth you have in exchange for government qualifications, your chances of obtaining office obviously increase substantially if you have both.