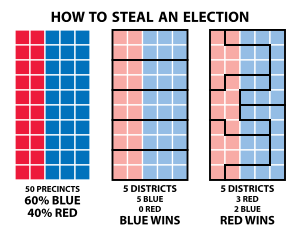 Gerrymandering is a practice that is sometimes used in politics to divide districts in a way that will allow one side to have a political advantage in an election.

Imagine that a state has 100 precincts, of which 60 are in favour of Party A, and 40 are skewed towards Party B, but voting is done by district not by precinct. Depending on which precincts are in which district, it could be possible for Party B to control more precincts than Party A, thereby winning the election.

Historically, districts or constituencies have been decided by geography alone, which makes the election process broadly fair because political alignment does not come into account – however if the central government has typically focused on, say, “the rich south” then “the poor north” may skew towards a different government because of a feeling of isolation from those in power. If there were some strongholds towards the current government in areas where it typically struggles to get votes, then in theory the practice of gerrymandering could be used to turn constituencies ‘the right color’ in the voting process.

Gerrymandering has negative connotations, and it is not something that is considered good practice, but it can be hard to tell the true motivations of changing the lines for a district or constituency. If the reason behind the change was one of practicality, or even intended to ensure that elections were more fair, then that is a different case. Manipulating boundaries to create more competitive elections is still a form of gerrymandering, but it is less controversial because it offers better representation for the whole population. Such changes are achieved by the use of neutral bodies that work with statistics or through the work of cross-party bodies, to ensure everyone has a voice. There have been occasions where such work has been vocally opposed by parties that benefit from gerrymandering, especially in the UK and the USA.

In some cases, rather than changing boundaries, the changes are achieved by counting prisoners as being a part of the district in which the prison is located, rather than in the area that the prisoner usually lives. This affects the percentage of non-voters significantly, and can have an impact on the overall outcome of an election as an indirect result, while adversely affecting the areas where there are no prisons, by comparison