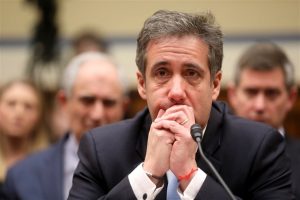 Yesterday, former Trump lawyer Michael Cohen, testified publically in front of the House Oversight Committee. Cohen, who once claimed that he’d take a bullet for President Trump, has turned against the President, calling him a “racist” and “conman.” While House Democrats salivated at anything could cause them to impeach Trump, House Republicans attacked Cohen’s character, reminding us that he has lied to Congress before.

What Did Michael Cohen Accuse Trump Of Doing?

Cohen accused Trump of telling him to commit campaign finance fraud to pay hush money to women who had affairs with Trump. Cohen plead guilty of this crime last year, saying he was ordered at the behest of Individual 1, later to be identified as President Trump. The accusation could be the undermining of Trump as this is in direct violation of campaign finance laws and could be the legal loophole that Democrats were seeking.

Cohen also accuses Donald Trump Jr. of warning his father about a Trump Tower meeting in 2016, where a Russian lawyer promised damaging information on Hilary Clinton.

Since Donald Trump entered his hat into the ring to run for Presidency, Democrats have asked for him to release his tax returns. Many accuse Trump of not being worth as much as he claims.

Cohen during his testimony provided financial statements from 2011 and 2013 that suggested that Trump inflates his income when needed but also deflates his income for tax purposes. Many House Democrats plan on using this as the “Ways and Means” to get a subpoena to finally get a hold of Trump’s financial records and tax returns.

In what surprised many, including President Trump, Cohen testified that he had never been to Prague or the Czech Republic. A British intelligence report claimed that Cohen had traveled to Prague in the summer of 2016 to coordinate with Russians so Trump could win the election.

Cohen also said that Trump had praised President Vladamir Putin but had no evidence of collusion. Cohen could not elaborate anymore because Special Counsel Robert Mueller’s investigation is still on-going. Cohen has been cooperating with the special counsel and will head to federal prison on May 6th. For more information, you can visit website here. You can also watch the full testimony here: